Many physical phenomenon exhibit periods of relatively smooth behavior punctuated with small bursts of activity, such as blood flowing through a heart. A computationally efficient simulation should automatically focus more effort on these regions of activity, but the standard methods for small systems of ODEs are less efficient when applied to a complex system governed by PDEs, such as the blood flow example, climate, crystal growth, etc. My research will focus on designing time stepping methods that scale well with PDEs to address these concerns.

Organizers of From the Fundamental Lemma to Discrete Geometry, to Formal Verification: A conference in honour of Thomas C. Hales on the occasion of his 60th birthday

Where are you currently working? And what are you working on?

Kapulkin: I am an assistant professor at the University of Western Ontario in Canada.  I work on a variety of topics, including Homotopy Type Theory, Formal Verification, Homotopy Theory, and Cryptography. I became interested in some of these topics because of Tom.

What made you decide to organize the conference?

Kapulkin: The reason is very simple: Tom was just an incredible advisor. I've known that I should be involved in the organization of such a conference since I first started working with Tom in 2011, and so in 2017 I reached out to Woden Kusner and Julia Gordon to ask if they want to do it together. And that's how it all started.

What made you decide to help organize the conference? 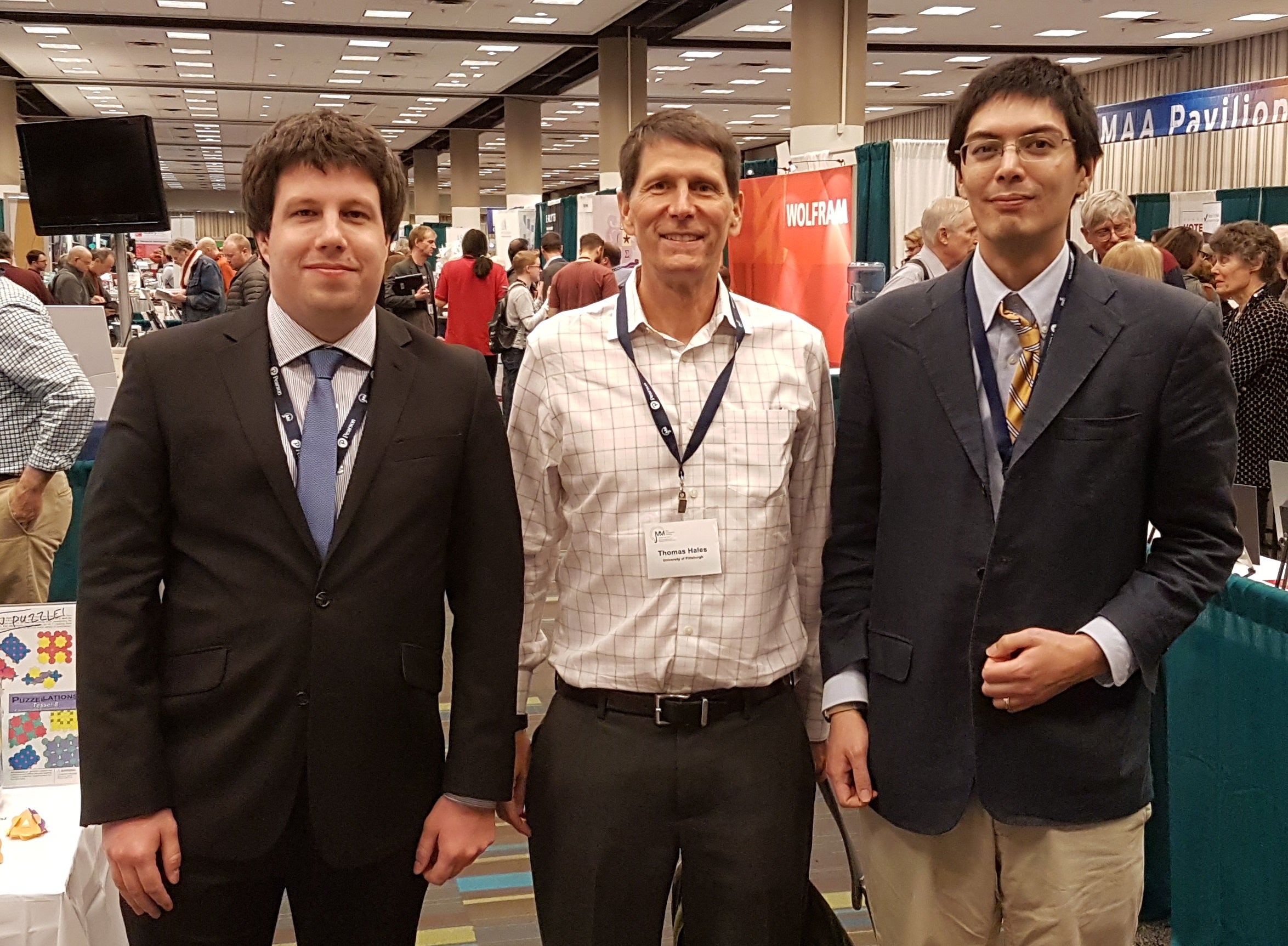 Kusner: I don't think there was ever a conscious decision; it's something that I wanted to help with if I could.

Can you share a memory of working with Tom Hales while you were students?

Kapulkin: What strikes everyone who knows Tom is his kindness. I still have trouble believing that he had enough patience to put up with me through all these years (I wouldn't!). Tom was always extremely supportive and feeling that he believes in me was a great source of motivation when I felt like I'm getting nowhere (and I'm sure that every grad student has such moments).

Kusner: I'm not sure if it came up while I was a student or just after I graduated, but I remember chatting with Tom about packing regular tetrahedra and configurations of spheres. Aristotle thought that they could be arranged to fill space. The historical record indicates that it took until the Middle Ages for this to be disproved. It turns out that there is a purely synthetic way to see this... it could have been done using math known to the ancient Greeks. It's really cool and you should read Tom's blog post.

What are 2-3 ways your experience at Pitt, and more specifically with Tom Hales, prepared you for your career?

Kapulkin: Without a doubt, Tom was the single greatest influence in my mathematical life. It's because of him that I became interested in Formal Verification and Cryptography, but not only has Tom taught me a lot of math, he also taught me how to think about math -- it's from him that I learned how to approach mathematical problems.

I don't know how, but Tom always knew how much space to leave me. One hears sometimes about advisors who are too hands on or too hands off, but Tom always knew when to get more involved and give me direction, and when to let me take the initiative. I think that was the key factor that let me graduate in 4 years and secure a tenure-track research position only 3 years later.

Finally, Tom is just a great mathematician with such a vast knowledge! Even if one is not his student, attending his talks and courses, or hearing his comments and questions in the seminars already greatly enriches one's understanding of mathematics.

Kusner: I was able to explore a lot at Pitt, which was itself a wonderful experience, but Tom helped me find what I wanted to work on and make it my own.  He is a fantastic teacher, mentor, and advisor.

Scott Zimmerman for his work on Analysis and Geometry in Metric Spaces: Sobolev Mappings, the Heisenberg Group, and the Whitney Extension Theorem

Jilong Hu for his work on Vortex Sheets in Elastic Fluids